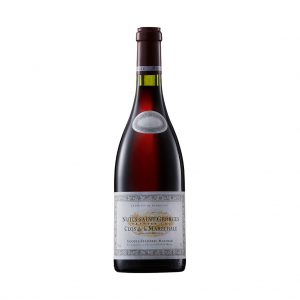 The vineyard was twice hailed during July, and has produced only half a normal crop in 2018. Fortunately the weather was dry after the July storms, so affected grapes shrivelled, and could be removed on the sorting table. The wine has purple-ruby colour of medium depth, aromas being open, spicy, fresh and floral. Palate shows admirable roundness, with fleshy texture, rich tannins which are well rounded, and charming, soft aftertaste (for drinking 2023- 2030+).

Frédéric Mugnier’s wines are greatly admired and loved. He tells us we were his first overseas client. This was for his 1985s, which proved to be the first of many classics. His Chambolle-Musigny is an outstanding bottling, at village level, with First Growths Les Fuées and Les Amoureuses, and his Grands Crus Bonnes-Mares and Le Musigny being now recognised as Burgundian benchmarks. With the exception of Le Musigny (where he is the second largest owner, after Comte Georges de Vogüé) his vineyard holdings in these appellations are minuscule, so there has always been the severest difficulty sharing out the allocations.

In addition to Frédéric`s vineyards in Chambolle, the Nuits-Saint-Georges 1er Cru Clos de la Maréchale has been owned solely by his family for generations. The walled vineyard was for many years let out for cultivation, but in 2004 he succeeded in claiming the site back. Both Pinot Noir and Chardonnay (just a tiny proportion) are planted here. To handle the additional volume from this vineyard, Frédéric built a new winery beside his home, and the wine has gone from strength to strength ever since his inaugaural 2004 vintage.

Mugnier no longer offers his Musigny at the same time as his other young wines. He became exasperated at finding the wine listed by restaurants, or otherwise consumed, immediately after release. Unless given time to mature properly, its character, subtleties and length do not appear in full. When pressed, Mugnier said. “10 years from vintage is usually a good time for drinking Musigny… maybe the beginning of the drinking window.” In our view, all his reds deserve and will reward cellaring.