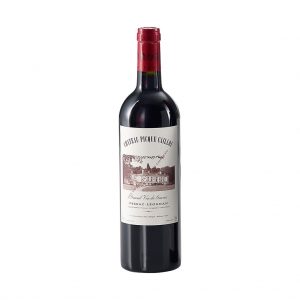 This wine epitomises claret at its most digestible, elegant and racy. 60% Cabernet Sauvignon, with 30% Merlot and 10% Petit Verdot went into this blend, which is ageing in 38% new, with 28% one-year, and 38% two-year barrels. Colour is medium-deep purple-ruby, aromas fragrant, rich and beautiful. Palate shows harmonious structure, with intensely fruity middle, fine tannins and refreshing, silky aftertaste (for drinking 2022-2030+).

Château Picque Caillou is consistently one of HH&C’s favourite, best-value picks from Bordeaux’s Left Bank. Wine-maker and château-owner Paulin Calvet has become a close friend; we buy, sell and drink his superb red and white with enormous enthusiasm and pleasure.

The Château is located in the heart of the Pessac-Léognan appellation, being a close neighbour of the prestigious Haut-Brion and Pape Clément. Covering 26-hectares, the property`s name carries an indication of its terroir, the pebbly soils here having originated from sediments deposited by the nearby Garonne river over thousands of years. Red grapes dominate the plantings (60% Cabernet Sauvignon, 35% Merlot, 5% Petit Verdot), with just over 3 hectares planted with white (90% Sauvignon Blanc, 10% Sémillon).

The vineyard dates back to the 18th century. Jean Laclotte, a famous architect of the time, built Picque Caillou in 1756. Later on, his son Etienne Laclotte made it his summer residence to take advantage of the warmth and mildness of the gentle Aquitaine climate. Etienne Laclotte died in 1812. Successive owners took little care of the vineyard until the property was bought in 1947 by Etienne Denis, a Bordeaux entrepreneur based in Indo-China, who entrusted the vineyard to competent estate managers. After the property had passed into the hands of his son, Alphonse Denis, it was his grand-daughter Isabelle, along with her husband Paulin Calvet, who became the owners in 1997. Settled at the property since 2000 with their 5 children, they breathed new life into a house which had been uninhabited for many years.

Coming from a long line of Bordeaux wine merchants, Paulin Calvet turned his full attention to the vineyards and winemaking at Picque Caillou in 2006. In 2007, Paulin asked consultant œnologist Valérie Lavigne to assist the new crew and contribute her expertise and technical support to the winemaking process. In each new vintage, Paulin and his team seek to bring out the pedigree, elegance and purity of taste in the wines while preserving fruit character and balance.