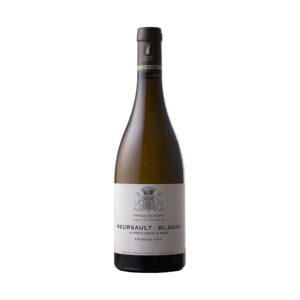 This wine comes from 60-year old vines and shows exceptional concentration, with just three barrels being made in 2020. In colour, pale, green-golden; on the nose opulent, spicy fragrance. The palate is densely fruity, medium bodied, very concentrated, with great length, finishing smooth, fresh and silky (for drinking 2022-2028+).

Domaine Chapelle de Blagny`s vineyards belonged to the Cistercian Abbey of Maizières, from the 12th to 18th centuries. In 1811 they were bought by an ancestor of Etienne de Brechard, the present owner. For 5 generations the family discreetly tended the vines, harvested the grapes – and sold them, until recently, to local merchants. We were the first to discover Domaine-bottlings from this exciting estate, and introduce them – new to the UK – with the 2015 vintage. The property is named after a 15th century chapel, next to the winery.

The First Growth vineyards in the hamlet of Meursault-Blagny may be less well known than First Growths like Perrières, Genevrières or Charmes, but quality-wise they are up there with the greatest. With global warming, they are becoming more and more desirable each year, as their altitude protects them from the most torrid heat, allowing precious, natural acidities to be maintained. They lie on high, steep slopes straddling the communes of Meursault and Puligny-Montrachet. This is classic white wine land, with clay-limestone marls. Domaine Chapelle de Blagny currently cultivates 6 hectares of vines, all concentrated in this zone.

Research is on-going here to identify the best cooper from whom to source the Domaine’s new barrel purchases. The recently established artisan barrel-maker Eric Millard’s output is proving superb. Oak staves are aged in the open air for three years (this is not unusual, and may be found at several cooperages) but Millard’s staves are extra thick, and allowed to heat up gently for three hours over the flames which enable them to be curved. The unfinished barrel is then covered, and allowed to return to normal temperature over 24 hours. So the toast goes deeply into the wood, and is very light, giving the subtlest results.