The 2020 Burgundy vintage looks set to go into the records as being of excellent quality, though highly unusual. This mini-report (dated 3 September) comes while some growers are continuing to pick, whilst others have finished.

A warm spring and early summer allowed vineyard growth an early start, and flowering of the vines generally went through well. There was a heat spike towards the end of June, then very dry, often torridly hot weather characterised both July and early August. Picking began in Meursault and Volnay around 20-22 August, some of the earliest dates ever recorded. The health of the grapes, both red and white, was exceptional – with no traces of rot to be seen. Sorting would be needed to eliminate parts of bunches , or whole bunches, which had not had leaf-protection from sunburn – but vibrating sorting tables or human hands would be able to take care of this.

Growers were faced with difficult choices. In some plots, the summer heat and lack of rain meant that leaves were turning yellow or brown, signalling that the plant could ripen its fruit no further. It was essential to pick, before grapes became dessicated. Pinot Noir grapes were often tiny, with thick skins, and what looked like little juice. They appeared to have withstood the heat less well than the Chardonnays, and many people found themselves, unusually, harvesting their reds before the whites.

Many vineyards saw sugars reaching the sorts of levels where growers would wish to harvest, however there were doubts about whether the pips and skins had fully ripened. Should a domaine wait in the hope of refreshing rain (forecast for the weekend of 28/29 August) – or should the crop be picked without delay? Malic acidities had dropped (due to the summer heat) to minimal levels, but beneficial tartaric acidity was holding up well, promising freshness to balance the richness of the grapes. The answer proved to be “stop-and-start” for many. Pick those vineyards which were ready, then take a break, waiting for those in cooler spots to ripen fully.

There was relief that the tiny Pinot Noir berries nevertheless seemed to be yielding more juice than initially expected. Perhaps the crop size would equal, or surpass, the small one in 2019 – in many cases it will not, but the white harvest appears to be more comfortable.

Colour from thick Pinot skins appears to be moving easily into the fermenting juice, a healthy sign. Rain did fall (though in varying volumes, from village to village) during the weekend of 28/29 August. But was it too late to be really beneficial, for the later pickers?

With grapes so healthy, sugars plentiful and acidities appearing to have held up well, fine qualities look assured, but there are bound to be varied results. The harvest has been such a long-lasting one, and the summer had been so very hot and dry.

Daniel Dampt owner in 1st Growth Chablis Côte de Léchet on Wed. 26 Aug., one day before his picking starts. Chablis has been lucky in 2020, receiving much needed rain in early August, to help grapes mature and swell. Some sun-burnt bunches, see 2nd pic., but these will not affect fine quality in prospect, and hopefully reasonableyields. 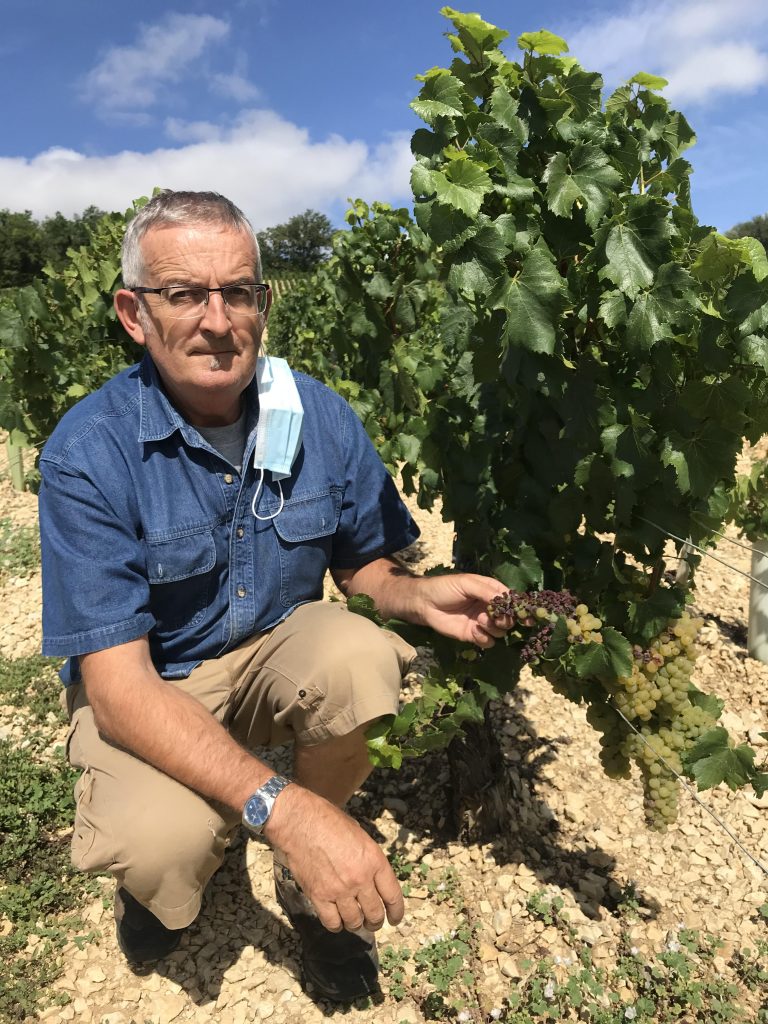 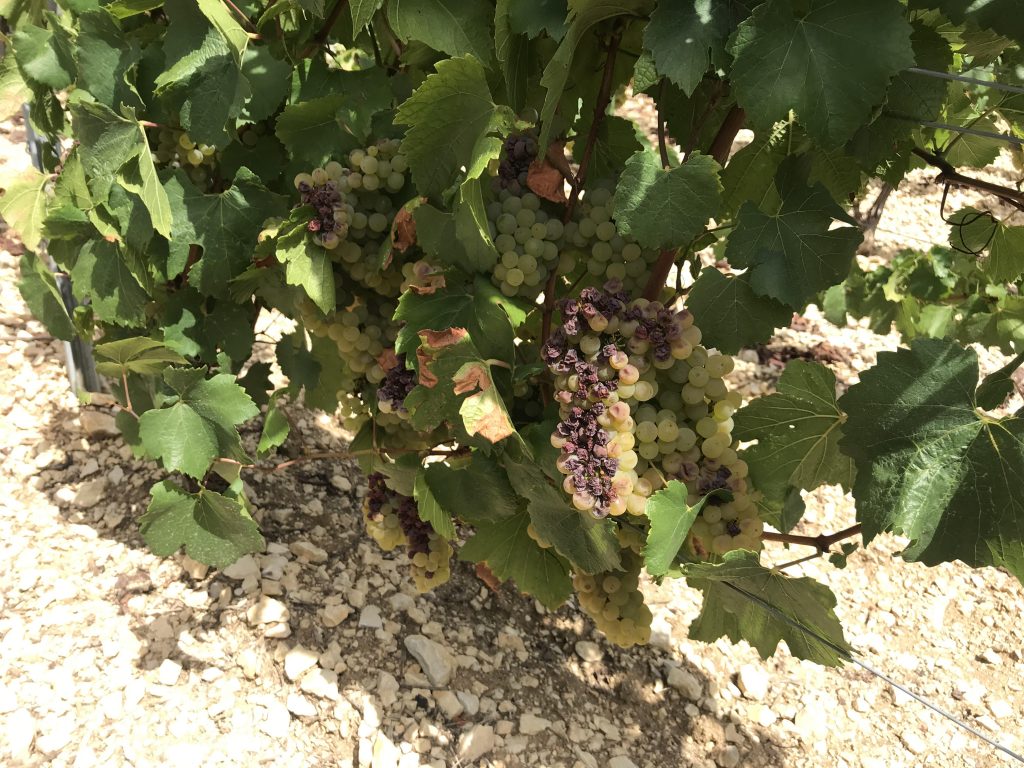 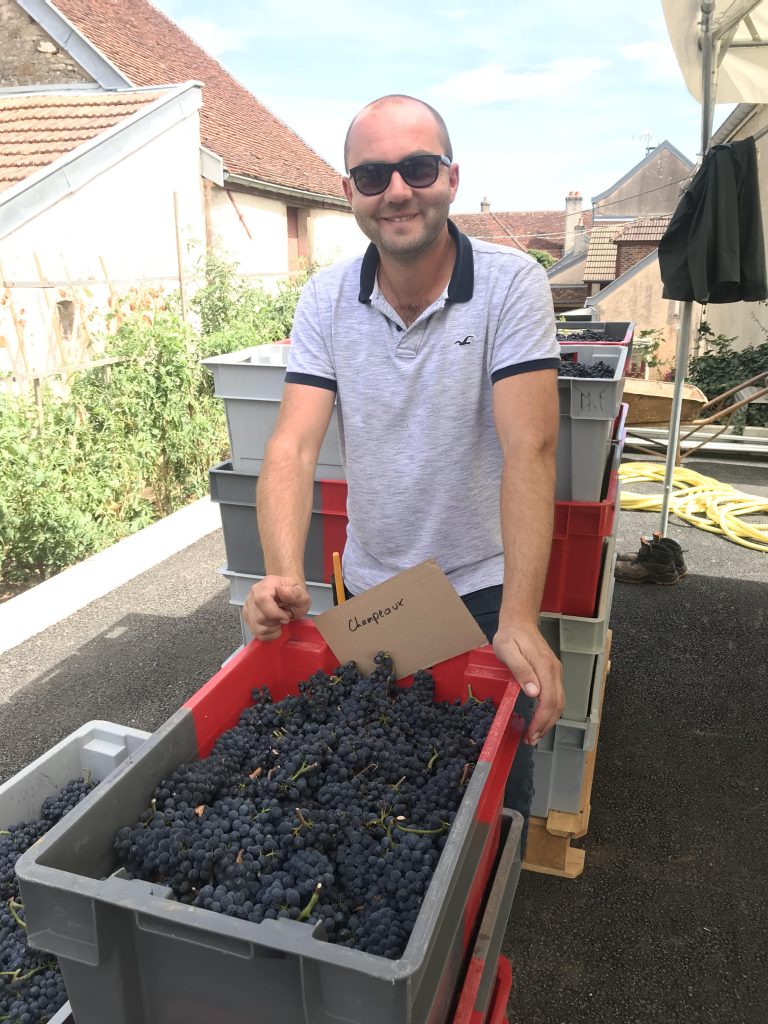 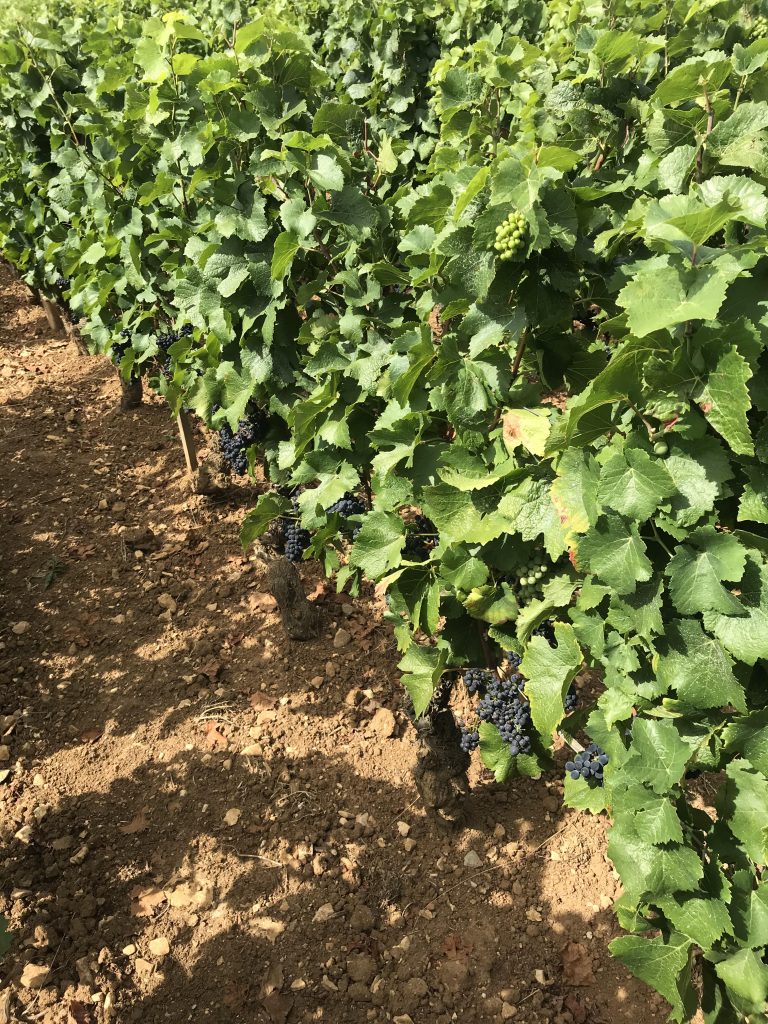 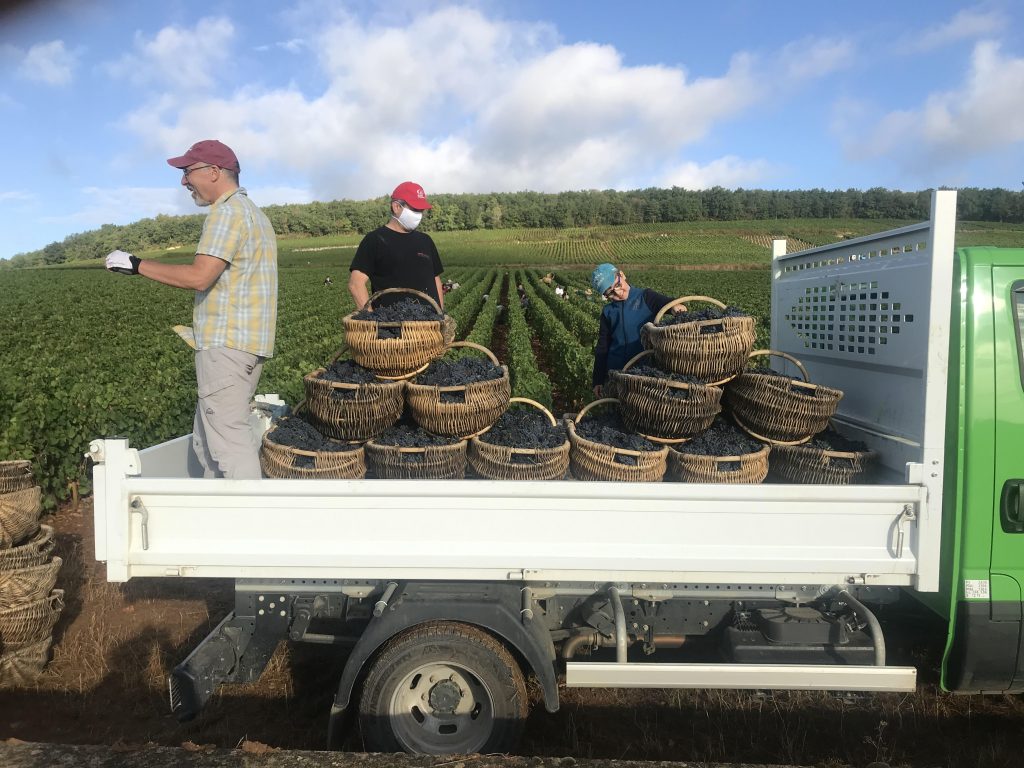 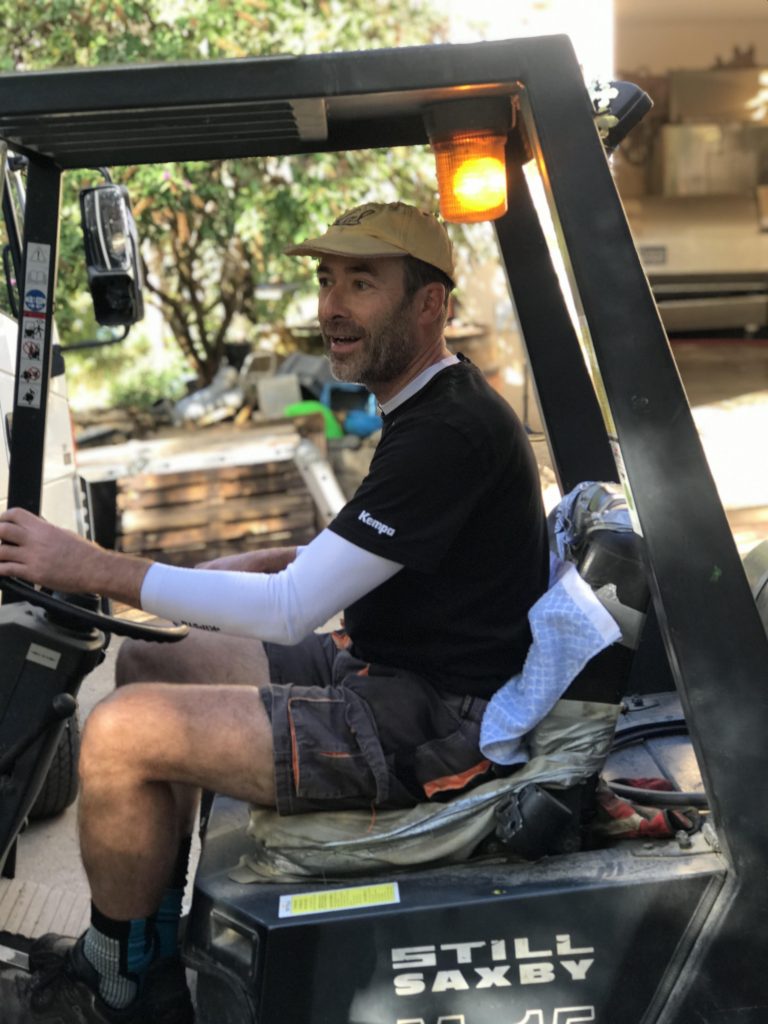 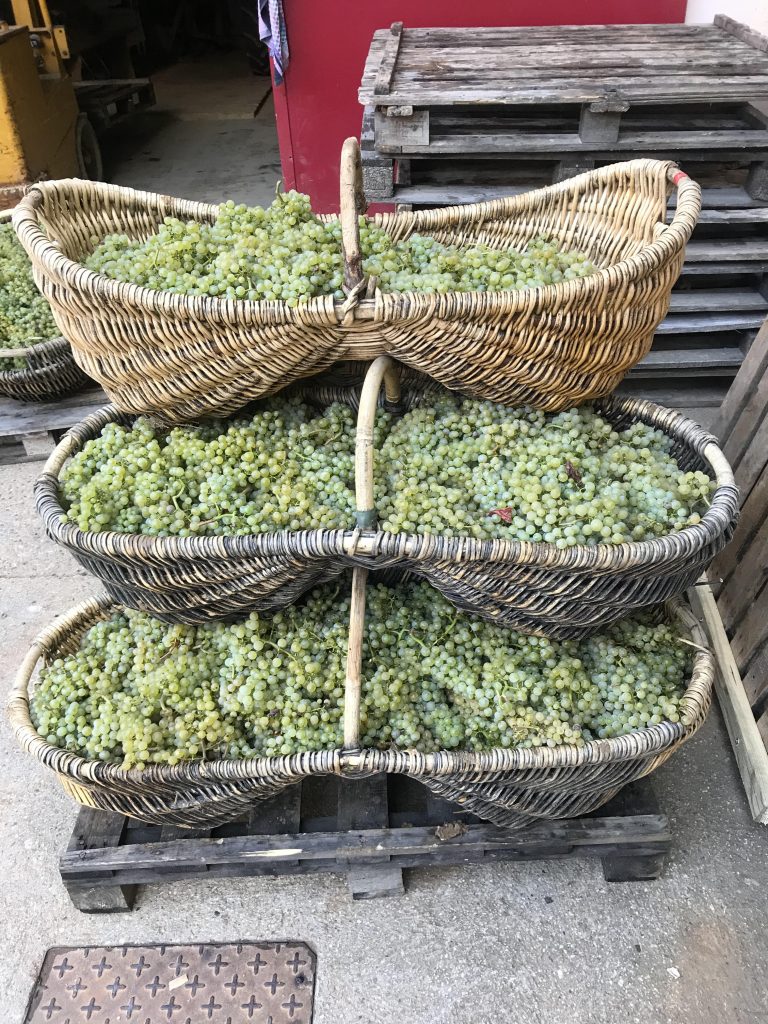 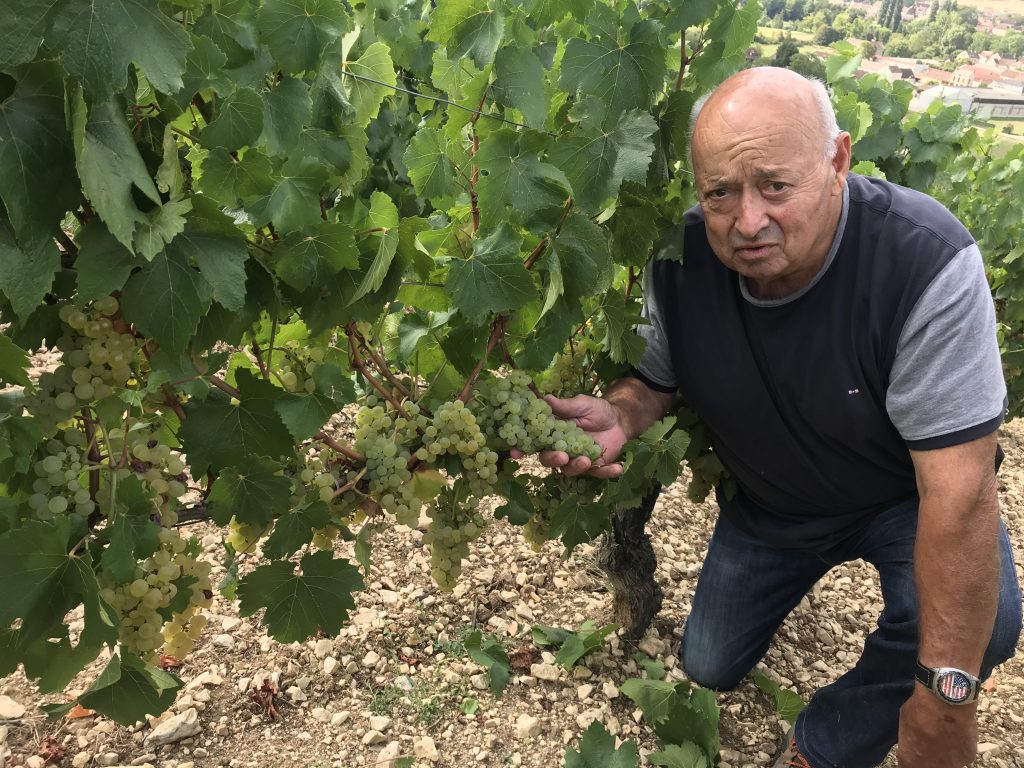 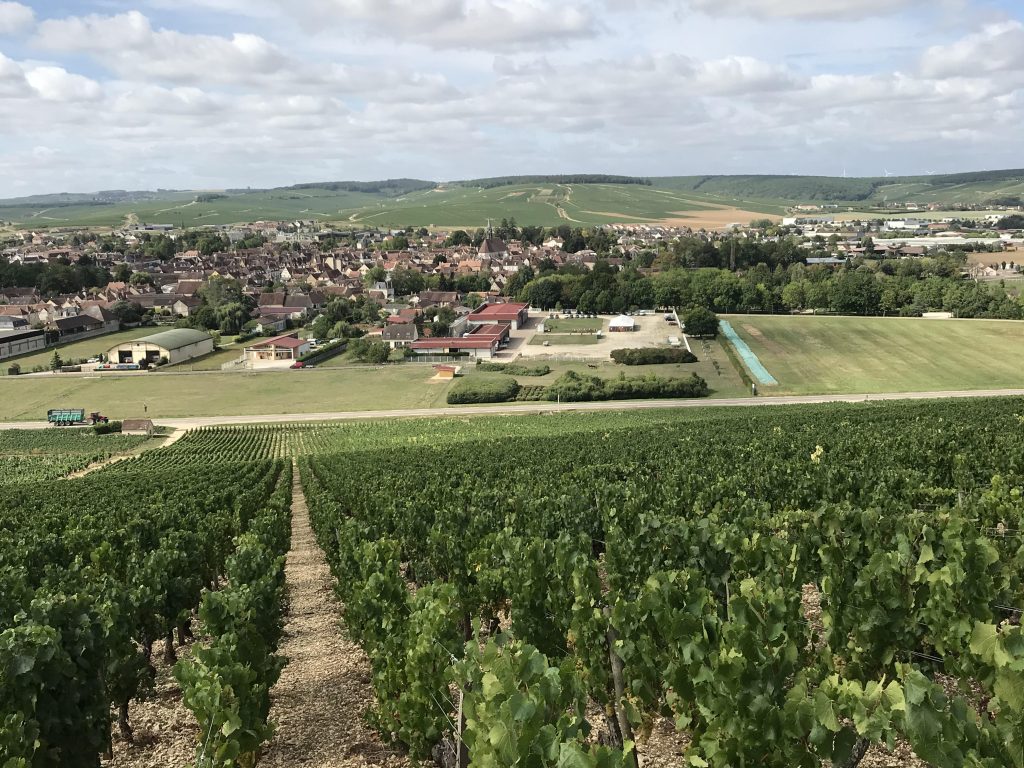 Thibaud Clerget was an early starter, picking Volnay Caillerets and Clos du Verseuil prior to Sat. 22 Aug., with Clos Vougeot & Pommard Rugiens the following week, to complete the reds, with Meursault Chevalière at end.Grapes so healthy many whole bunches have gone into his Corton and Clos Vougeot. 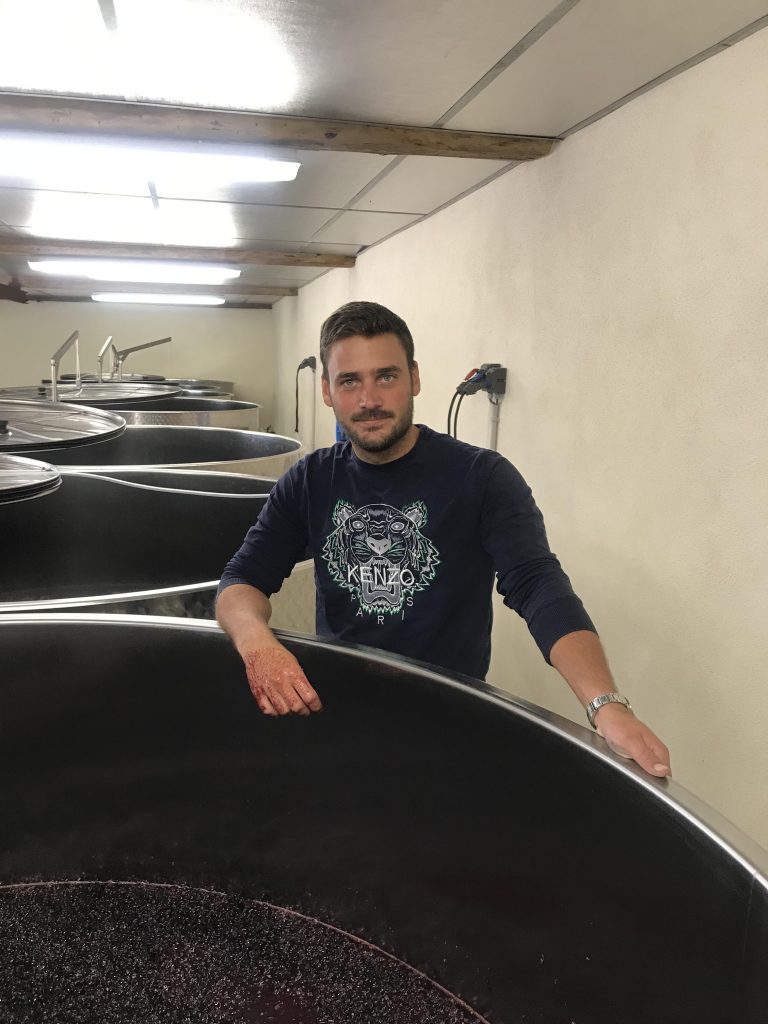 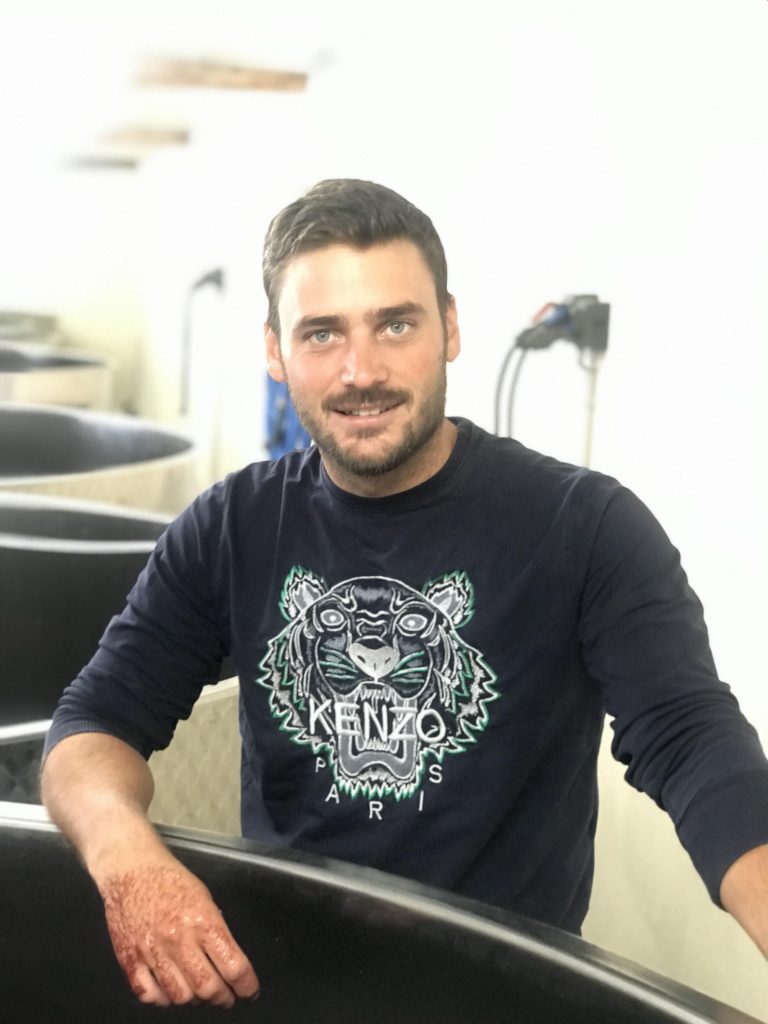 Boudier picked his reds 25-28 Aug. then Corton-Charlemagne on 2 Sept.. It looks like only 4 barrels Bourgogne Pinot Noir LesBarrigauds this year (normal crop is 6 or 8), but Chardonnays are more plentiful like these beautiful Pernand-Vergelesses blancs. 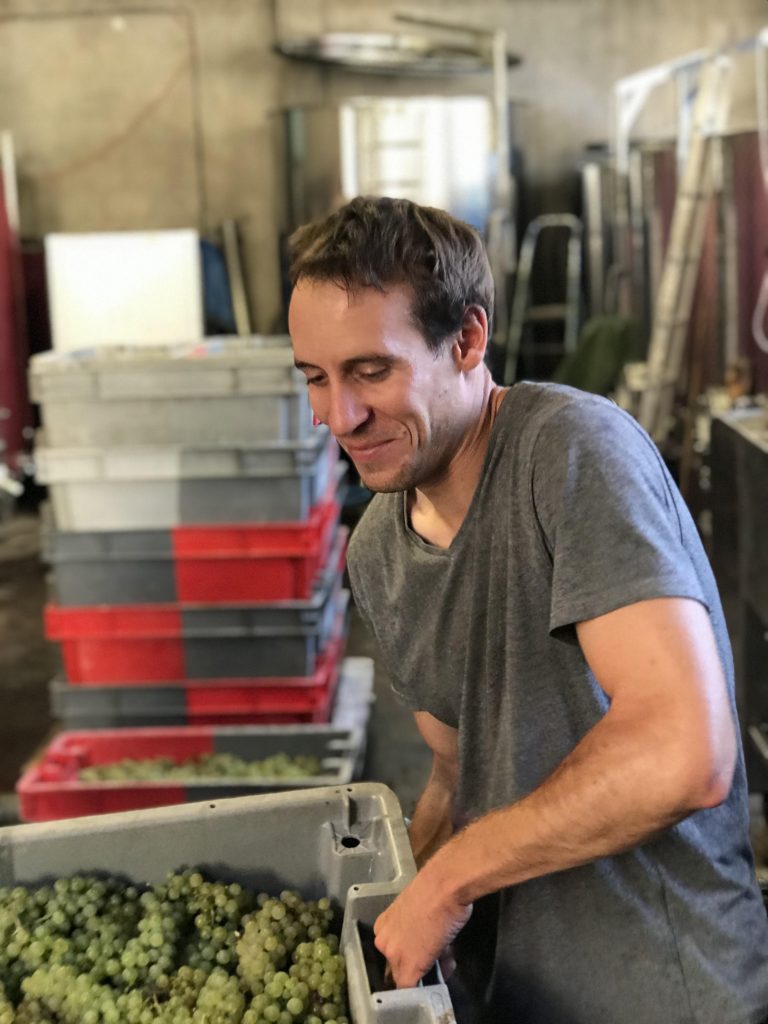 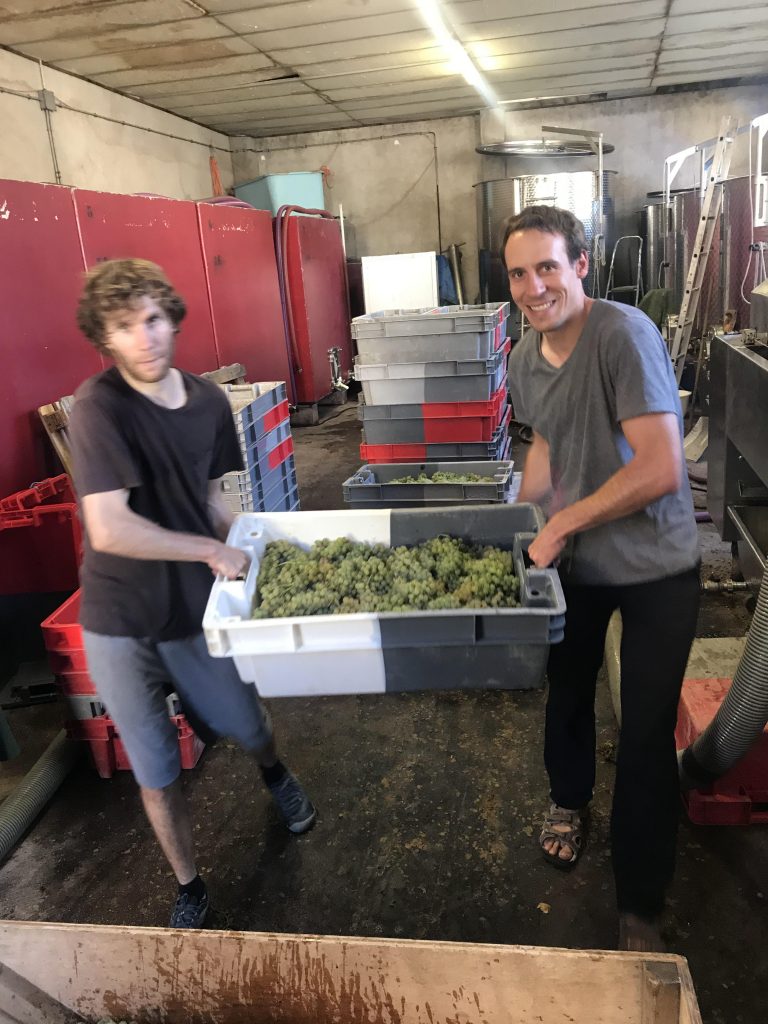 Benoît Riffault and Emilie Boudot in charge of wine-making at Etienne Sauzet more than happy with the lovely health and balance of their Chardonnays from Puligny-Montrachet and Chassagne. They started picking on 22 August, one day earlier than in 2003, another heat-wave year. Acidities are much better in 2020, they are delighted to note. 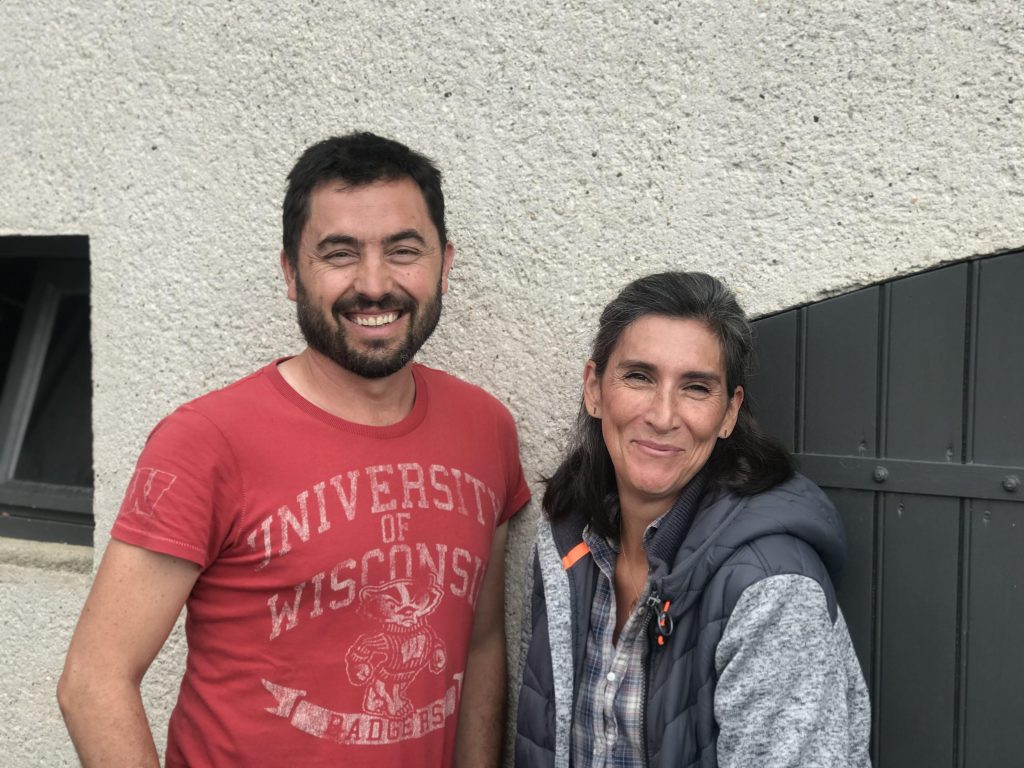 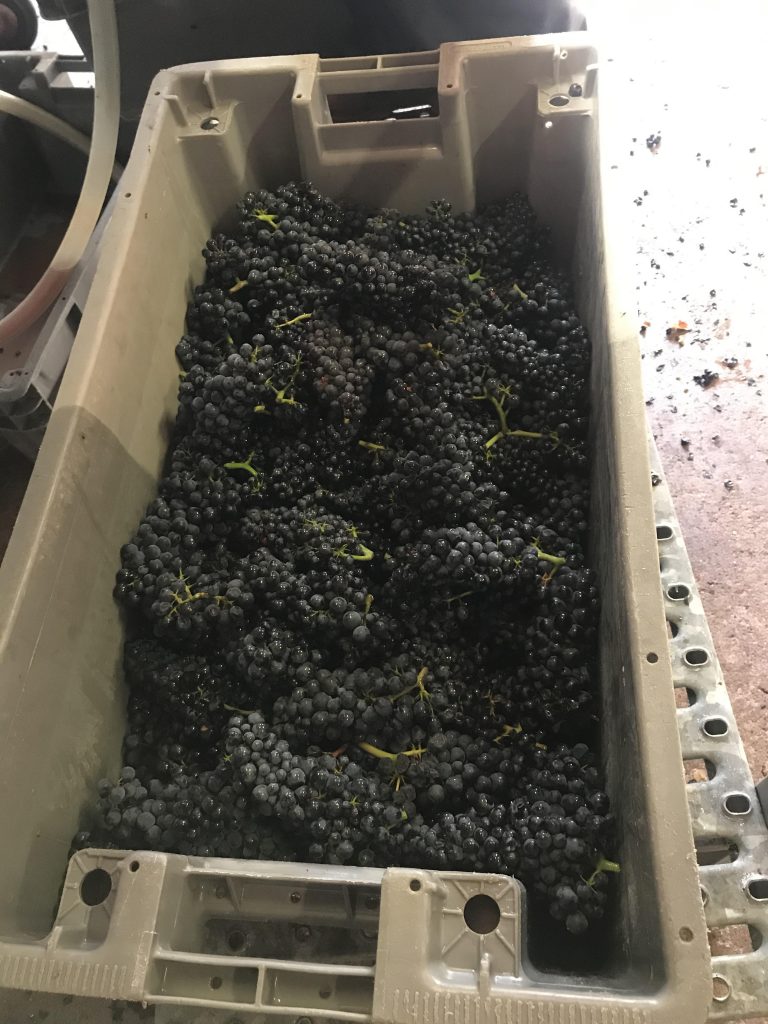 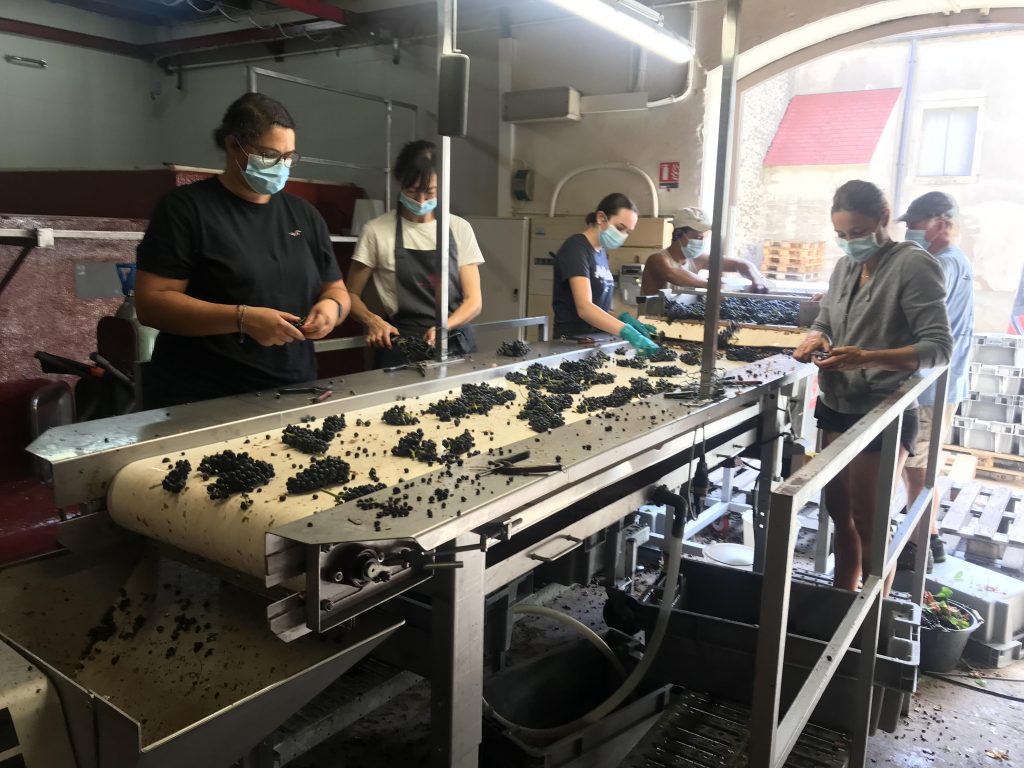 Thomas Bouley very happy with tiny berries, and healthy bunches. As ever here, there will be careful fine-tuning of % of whole cluster in each cuvée, here the Pommard Frémiets will be 70-80% not de-stemmed. He’d been hopeful of normal-sized crop, but no rain in July and August put paid to that hope. 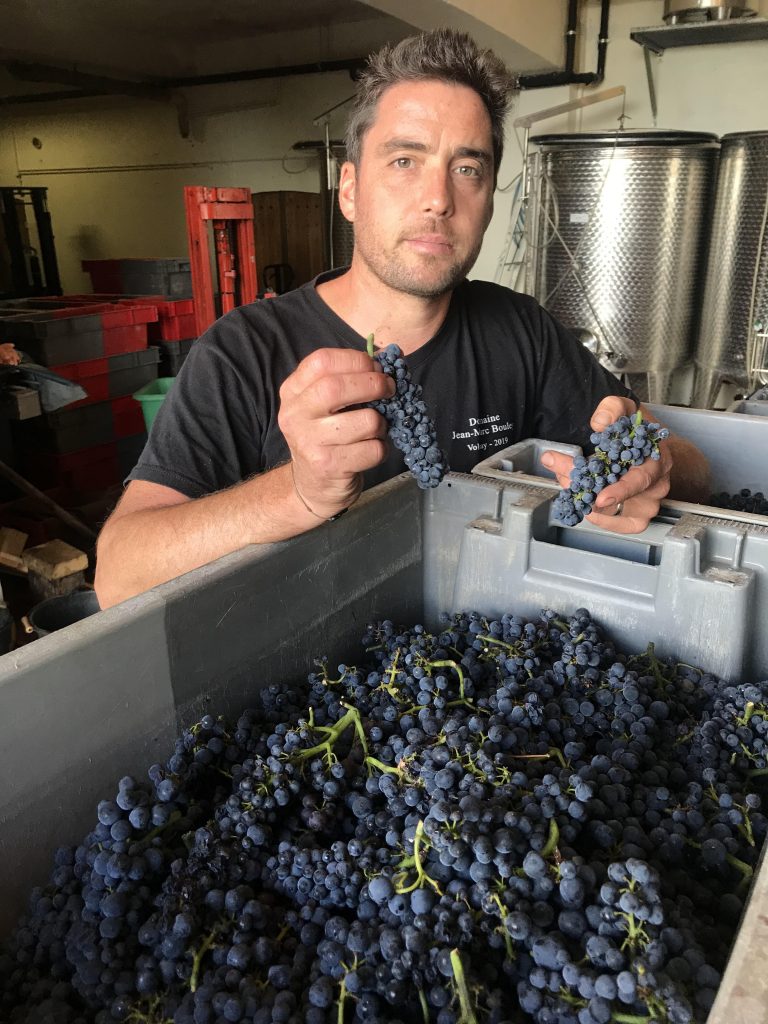 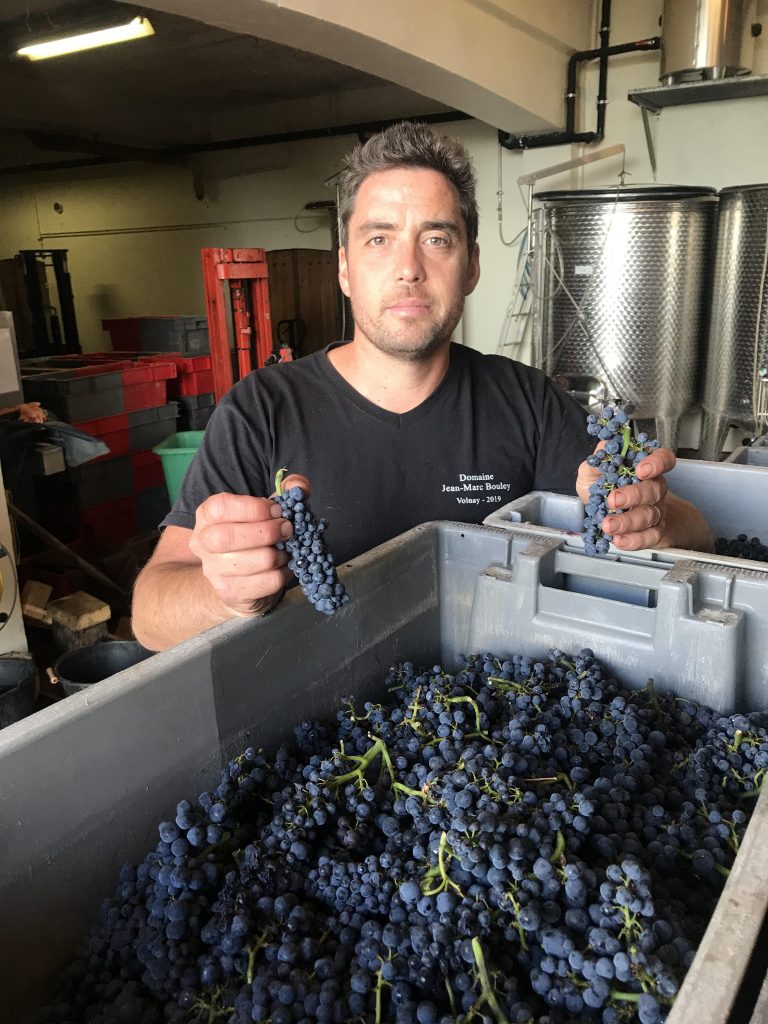 Joannès Violot-Guillemard with vat of 100% whole bunch Volnay-Frémiets this year, no need to de-stem anything. Father Thierry drives by to oversee (though retiring now)- he’s OK with quality, not so happy with volume. A new winery soon to be in construction here. 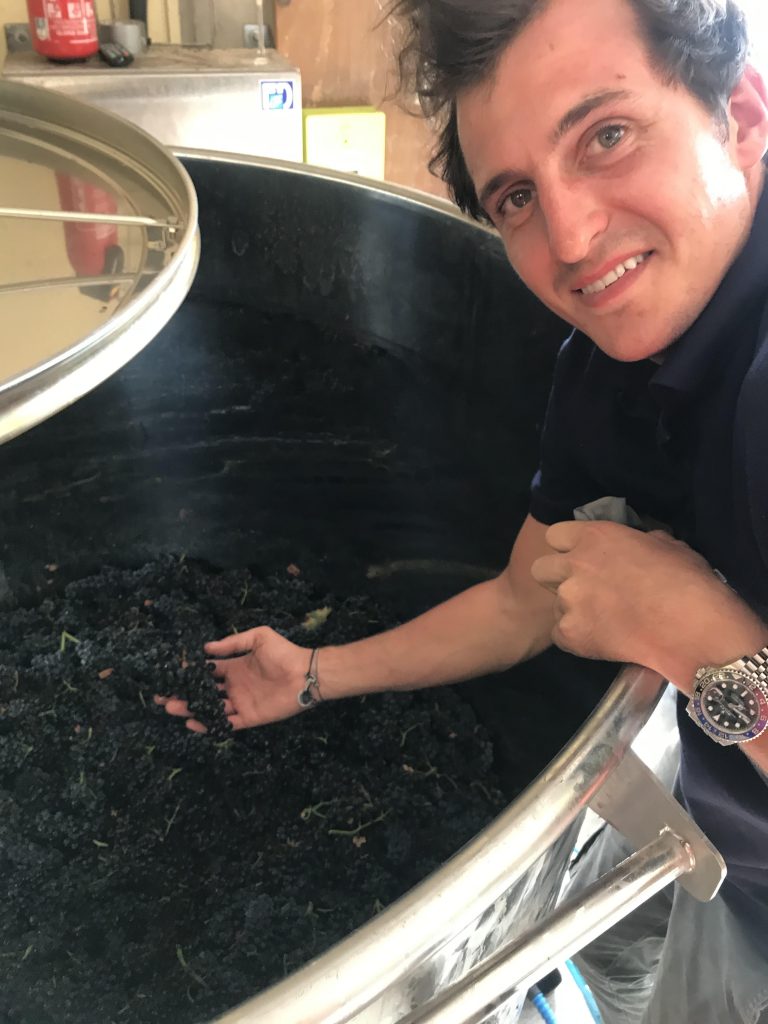 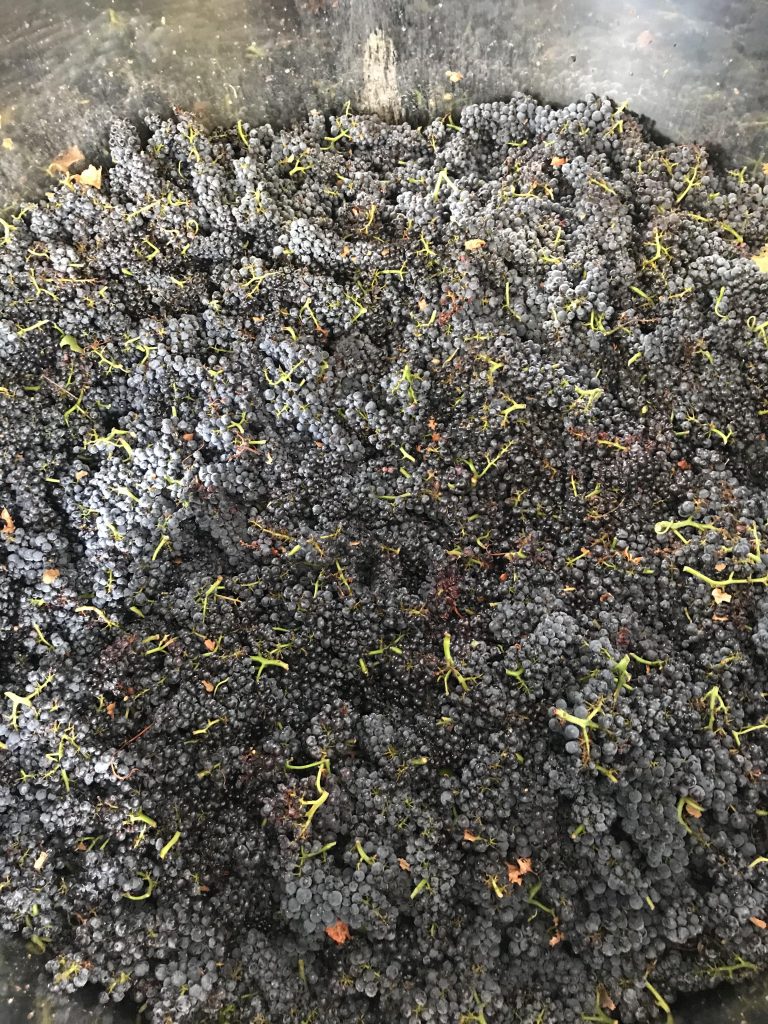 Domaine du Cellier aux Moines in Givry had less than 20mm. rain from 20 June to harvest, much less than Côte d’Or. Here wine-maker Guillaume Marko with Clos Pascal vat, less than half full. 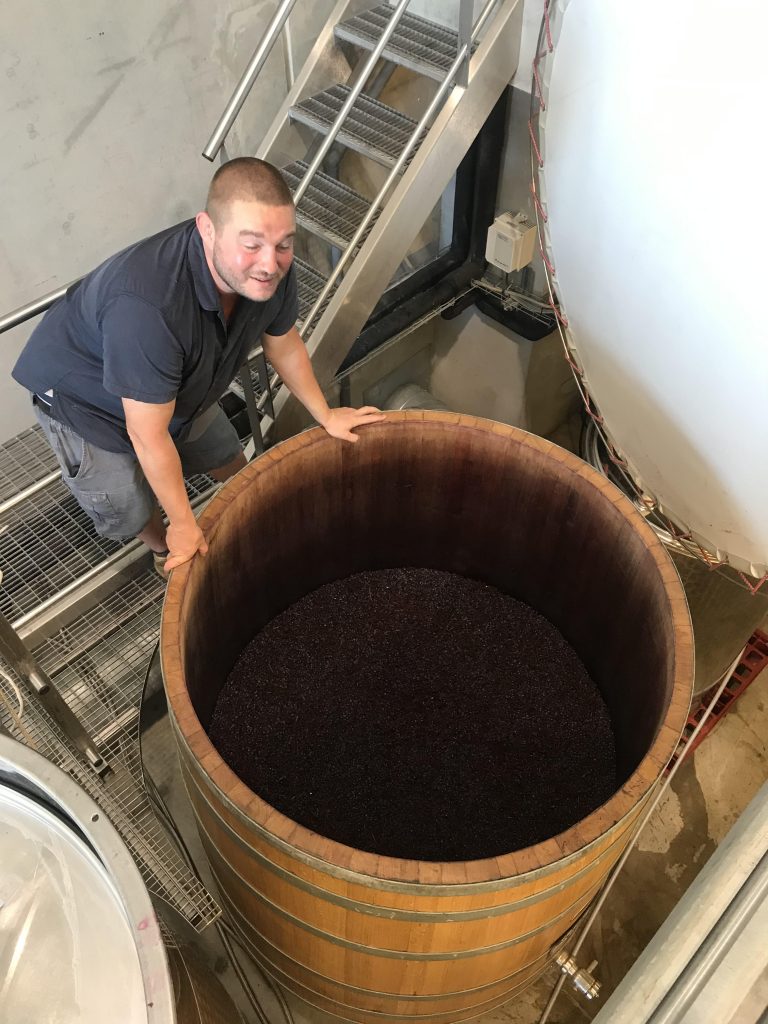 Vat shows 100% whole bunches Givry 1er Cru, picked 21st August. “No rain meant that the acidities have not been diluted, so we have good levels,” said wine-maker Guillaume Marko. 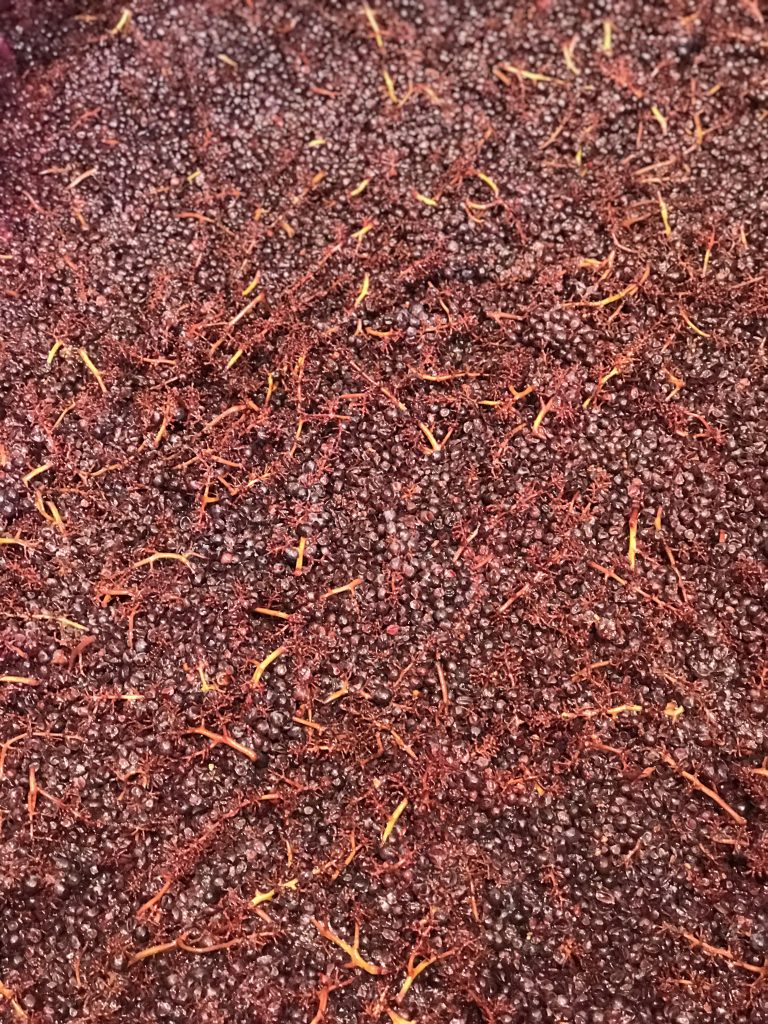 Owner Philippe Pascal says “Juice is very concentrated”.Concerning pumping over, Guillaume says : “It’s a complicated wine to vinify. Some punching down and pumping over will be needed to bring stuffing, but not too much, as tannins and colour are naturally plentiful.”. 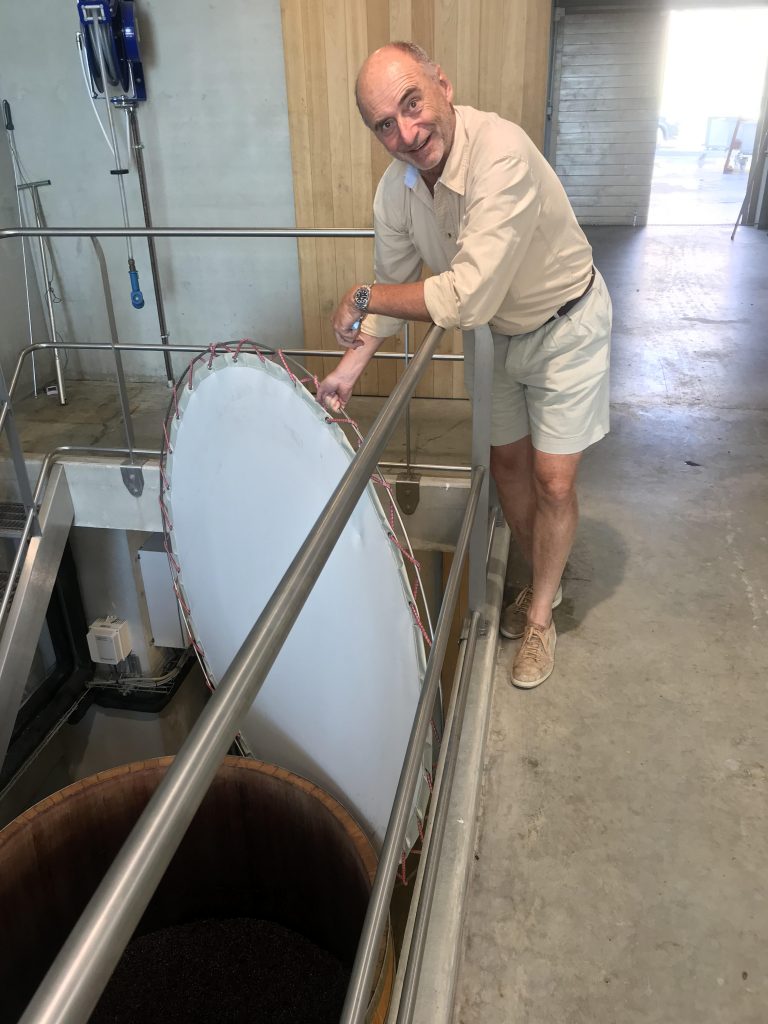 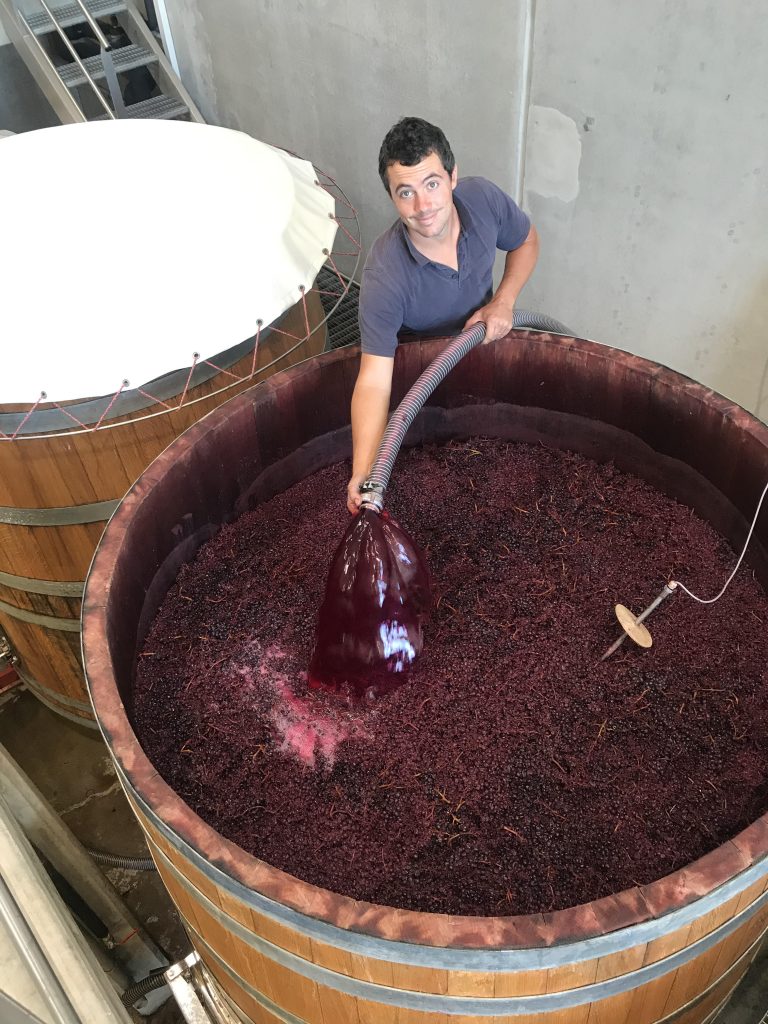 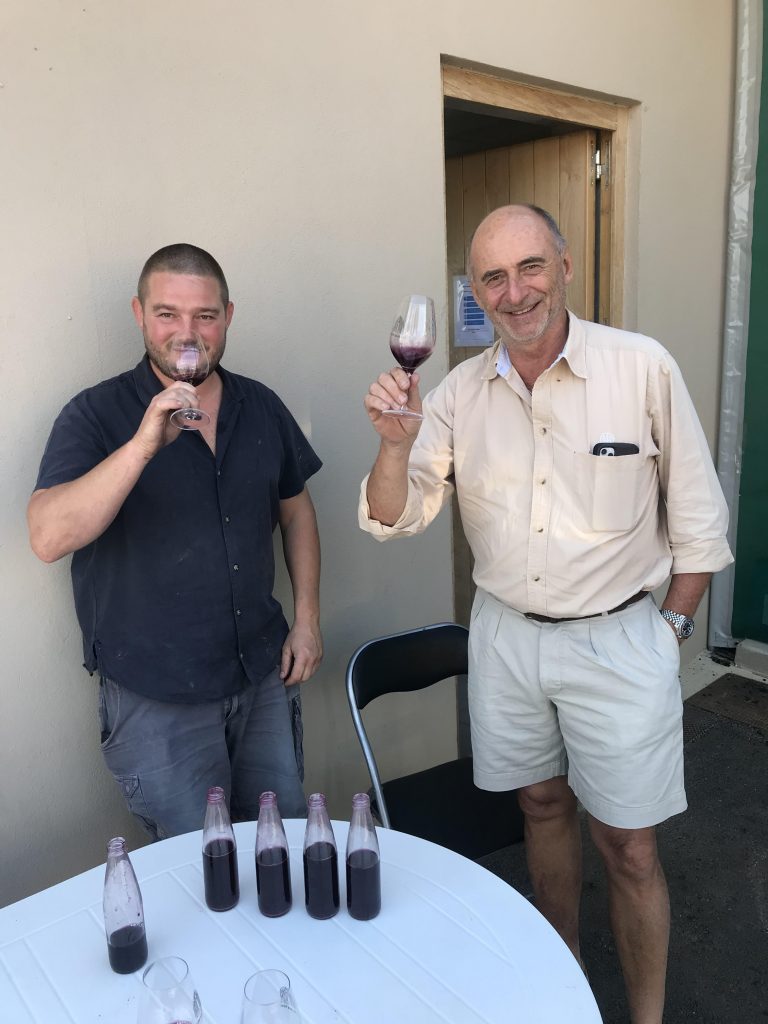