The Côtes de Forez are not conventionally thought of as part of the Loire wine region but the river rises nearby and the department is actually called Loire. Besides I would like to draw your attention to this delicious and well-priced summer red. Gilles Bonnefoy is a local who set up his estate, Les Vins de la Madone, in Champdieu in 1997 based on the Gamay grape that thrives in the region’s volcanic soils. He initially rented several parcels of old vines and a cellar, tending to vines and making wine alongside his day job in wine sales. He was able to purchase his first vines a few years later, turning his attention entirely to building up the domaine. Four hectares (9.9 acres) were initially planted, on different terroirs, mainly surrounding the Madone volcano. He now cultivates 11 ha (27 acres), which are both organic and biodynamic certified. Harvesting is by hand, with winemaking taking place in a modern winery. Use of SO2 is minimal.

Full bottle 1,300 g. Certified organic. An honorary Loire wine, since it’s grown in the Loire department (where the great river rises) and wouldn’t fit anywhere else.

Mid purplish crimson with a transparent rim. A tiny bit reduced initially on the nose but persuasively fruity and pure. Serve this cool, with charcuterie. Just the job for summer! More guts than many wines from this appellation. A joy to drink even if not for ageing that long. Pure exuberance. 13% 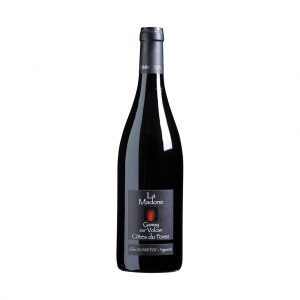